Sputnik, the first artificial satellite of the Earth

„I started to search through the radio band and heard the ham radio community speaking about it. The NBC TV station even interrupted the program in the morning of that day, announced the launch of the spacecraft by Soviet scientists, informed about frequencies of 20 005 and 40 002 kHz, and broadcasted their recordings of the famous beeps.“

„On the 4th of October mankind entered a different era of its evolution, the era of releasing its bounds to the Earth and the beginning of interplanetary flights. The era in which the ionosphere is not only investigated using radio waves emitted from the Earth’s surface...“

Dr. Jiří Mrázek (1923-1978),
ham radio operator and founder of the ionospheric department of the Geophysical institute, Czechoslovak Academy of Sciences, where he investigated the influence of the ionosphere and solar activity on radio wave propagation.

At the end of the 19th century, telephone operators noticed strange whistling sounds coming from long telephone lines. In 1953 the origin of these mysterious sounds was finally revealed: these „whistlers“ are low frequency electromagnetic waves that are emitted from lightning discharges and then propagate through the plasma environment of the Earth, the so called ionosphere and plasmasphere. Artificial satellites opened new possibilities for investigation of this environment, which was previously analysed only using ground-based measurements.

start of the Intercosmos programme

Intercosmos 3, launched into orbit in 1970, was the first spacecraft carrying an instrument from the ionospheric department: a telemetry transmitter for signals of electromagnetic fields in the very low frequency band.

The first human on the Moon,
Neil Armstrong, United States

launched in 1970 onboard the Interkosmos 3 satellite. 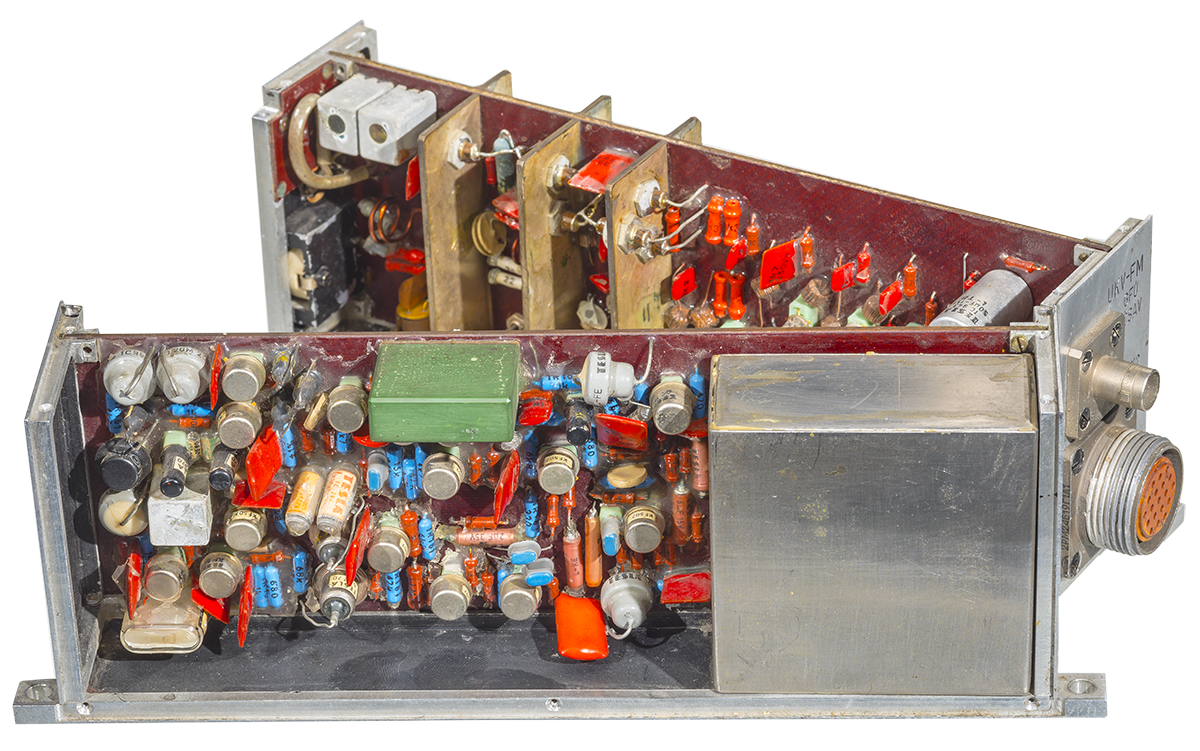 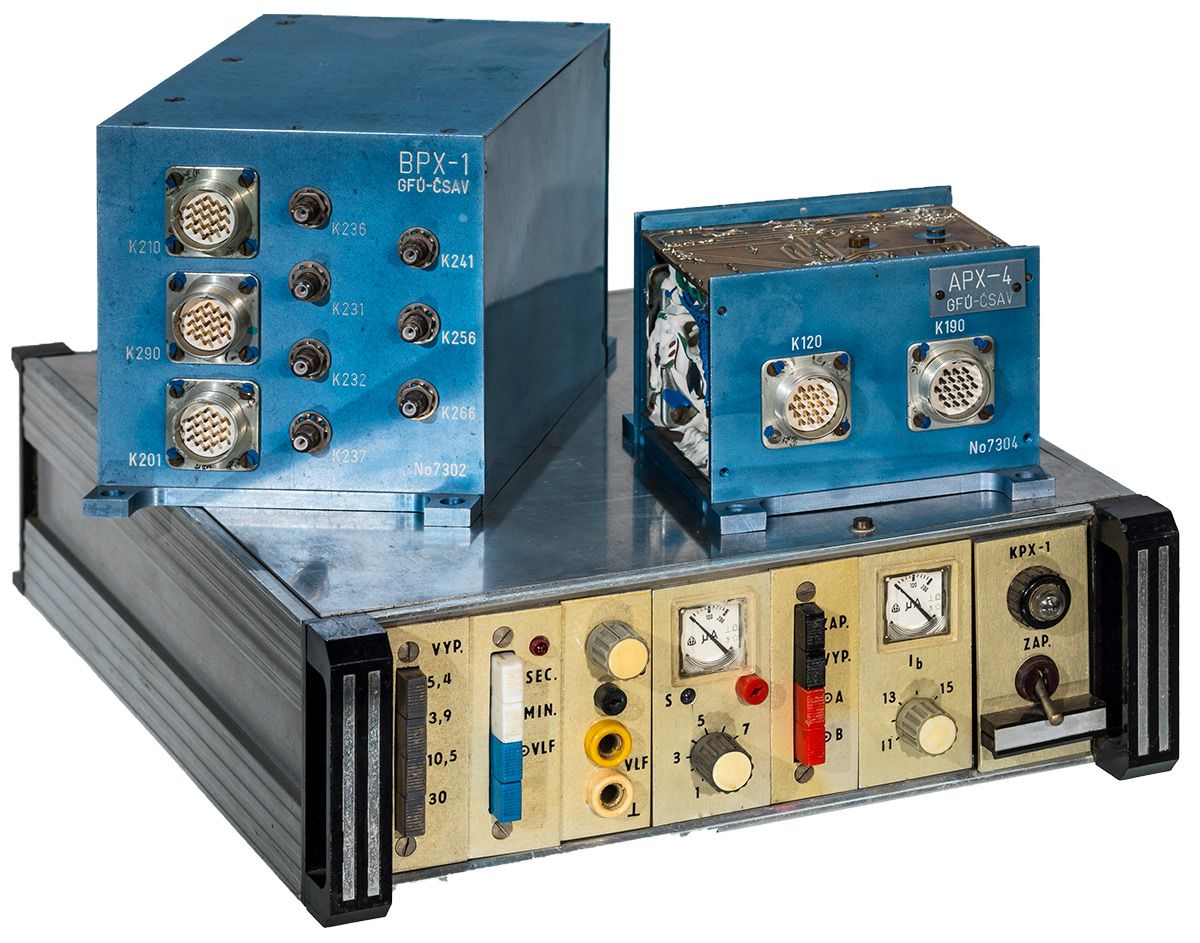 The Intercosmos spacecraft carried Czech instruments on board but the scientists dreamed about a separate spacecraft which would allow them to obtain more detailed data on the propagation of electromagnetic waves. An idea was born: to build a separate block of instruments and carry out the same measurements on the same orbit as the main spacecraft but at a well-defined distance from it. This new research methods was well received. Just, the spacecraft needed to be developed and built and the place for it on the rocket needed to be found...

the first Czechoslovak spacecraft Magion was launched into orbit

„To convince others that this is a real proposal, not a pure fantasy, this was the most difficult task...“

play / An interview abount a creation of Magion 1 satellite with Dr. Tříska and Vojta. Broadcasted in "Nula-Jednička" session, Radio Leonardo, 24. 10. 2005 (in Czech)

Radio signal from the spacecraft was received, decoded, and recorded by a tape recorder. The tape reels were then re-played and analysed.

play / Sound representation of data recorded on a magnetic tape during the first telemetry reception from the Magion 1 spacecraft, after its separation form the main spacecraft on 14 November 1978. The color diagram shows the frequency-time spectrogram of the received signal : higher-pitch tones appear higher on the plot and loud sounds are shown by red color.

play / Sound representation of data recorded on a magnetic tape during orbit 10208 on 31 August 1980. It contains recordings of whistlers measured by the electromagnetic sensors of Magion 1. The color diagram again shows the frequency-time spectrogram of the received signal.

Picture: The spare flight model of Magion 1, identical to the actual flight model which was launched into orbit, together with the main spacecraft Intercosmos 18 from the Russian cosmodrome Plesetsk. The Secret of Magion

After the separation from the main spacecraft, Magion 1 deployed its antennas and gradually started its first measurements. Two scientific instruments were carried onboard, in order to measure electromagnetic waves and charged particles. The last data were received on September 10, 1981 before the destructive reentry of the spacecraft to the Earth atmosphere. 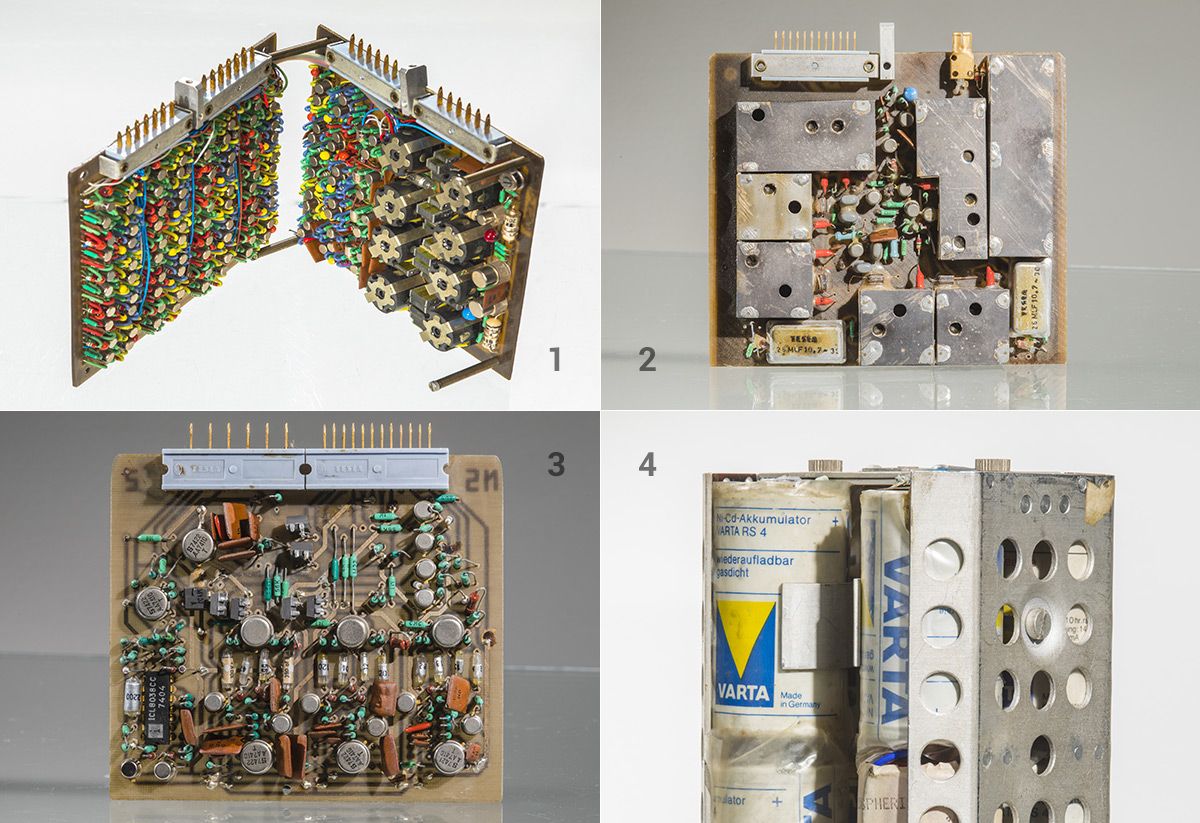 1/ Prototype of the onboard command decoder for the MAGION 1 satellite.

2/ Prototype of the onboard command receiver for MAGION 1 satellite.

3/ Prototype of the electronic board dedicated for the analysis of natural signals recorded by magnetic and electric antennas onboard the MAGION 1 spacecraft in the very low frequency band.

4/ Block of power accumulators from the Magion 1 payload.

Picture: An engineering model of the Czechoslovak spacecraft Magion 2. The flight model was launched together with the main spacecraft Interkosmos 24 on September, 28, 1989. 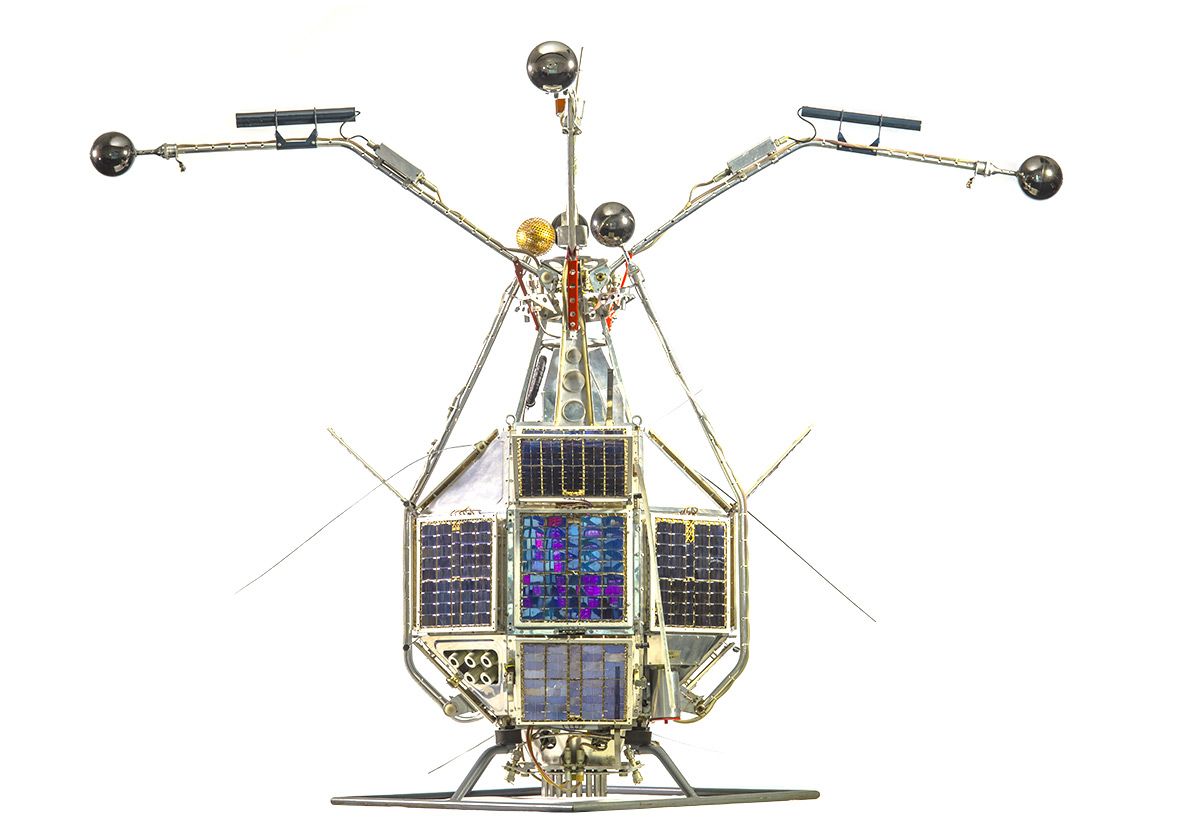 Similar to Magion 1, four other spacecraft from the Magion series were also launched into orbit together with a main spacecraft. Magion 2 (1989-1990) and Magion 3 (1991-1992) were equipped with numerous scientific instruments. For example, they carried receivers for analysis of electromagnetic signals which were supposed to be emitted from the main spacecraft either by a large loop antenna or by an electron beam. A set of nozzles for releasing compressed air was used to control the distance from the main spacecraft. 4/ The accumulator block from the Magion 2-5 payload.

Magion 4 (1995-1997) measured properties of the space environment inside the magnetosphere, in the source regions of aurora borealis and australis. Magion 5 (1996-2002) worked in the tail of the magnetosphere and at its outer boundaries with the solar wind.  Both spacecraft were spin stabilized, pointing to the Sun. They carried a set of scientific instruments for magnetospheric investigations: magnetometers, radio wave analysers, particle detectors, and an instrument for cold plasma measurements. 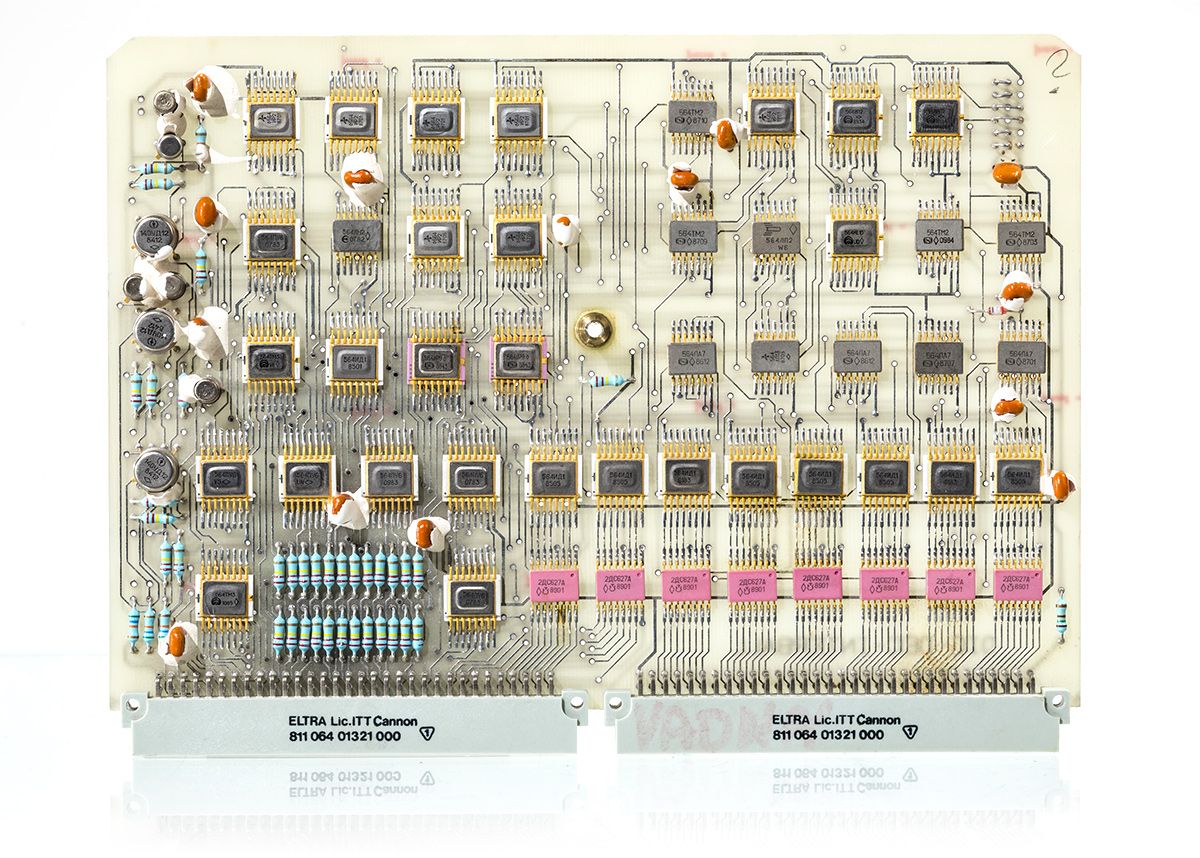 Picture: Prototype of the electronic board of the command decoder developed for the MAGION 4 and 5 satellites. 1/ Different types of covers which protect sensitive parts of satellite instrumentation during the pre-flight operations. Thered parts have to be removed before flight..

3/ Magion development lead to a new Digital Sun sensor DSS-3 dedicated for the estimation of the satellite orientation with respect to the Sun, prepared for the Luna-Resurs spacecraft.The sensor has also been successfully used for the RadioAstron and Chibis satellites.

Operations of the spacecraft and scientific investigations were very flexible. Scientists, after arriving to the Panska Ves telemetry station, could directly participate in the experiments. They could follow their results in real time and immediately use telecommands to change settings of their instruments for the next round of measurements. 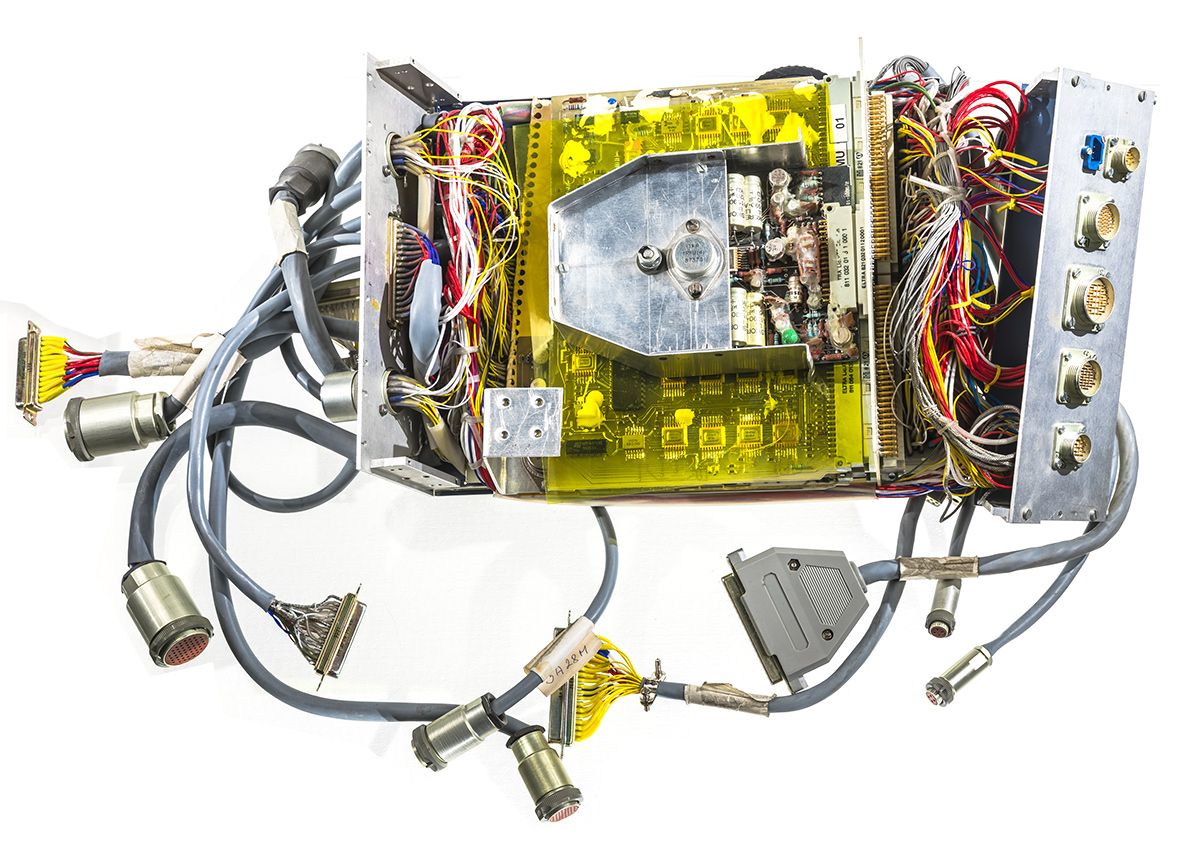 Picture: Energetic system of the Magion 5 spacecraft, used for laboratory simulation of possible failures. It helped to localize the damage, understand what happened, and to prepare a sequence of rescue telecommands. Following this, the spacecraft worked succesfully for more than 4 years.

Useful information was not only obtained from the measurements of onboard instruments but also from the behaviour of the spacecraft itself. A temperature decrease down to -60°C caused temporary technical problems with the Magion 4 spacecraft but the largest puzzle, however, was linked to an unexpected behaviour of Magion 5. The spacecraft was unfortunately damaged by the personnel of the cosmodrome during the pre-launch preparations. Czech engineers and technicians then used the backup system for simulation of possible failures in the laboratory conditions. After 20 months of resuscitation attempts they succeeded in activating the spacecraft. While the scientists challenged the secrets of space by their measurements, the spacecraft, in turn, challenged the enthusiasm, intellect, and patience of the scientists and engineers.

„We discovered that seemingly unsolvable problems can be eventually resolved with a bit of luck and patience.“